Every May the best of the best, as well as the most optimistic hopefuls in the poker game, make their way to the world’s best-known casino destination Las Vegas. Reason? To pit their game skills against each other in the WSOP competition.

Since the first WSOP was held in 1970 at the Horseshoe Casino, the event has grown steadily to gain both prestige and importance in the poker world. Not unexpectedly, the potential rewards for participating in the event are huge – and the more the number of players enrolling, the larger the prize of the tournament.
What was on display at the Rio All-Suite Hotel & Casino in Las Vegas, Nevada, during the WSOP 2012 event went down as the largest single day starting field in the main event records as more than 3,400 poker players paid the $10,000 entry fee to pit their skills against each other in the final of three starting days. 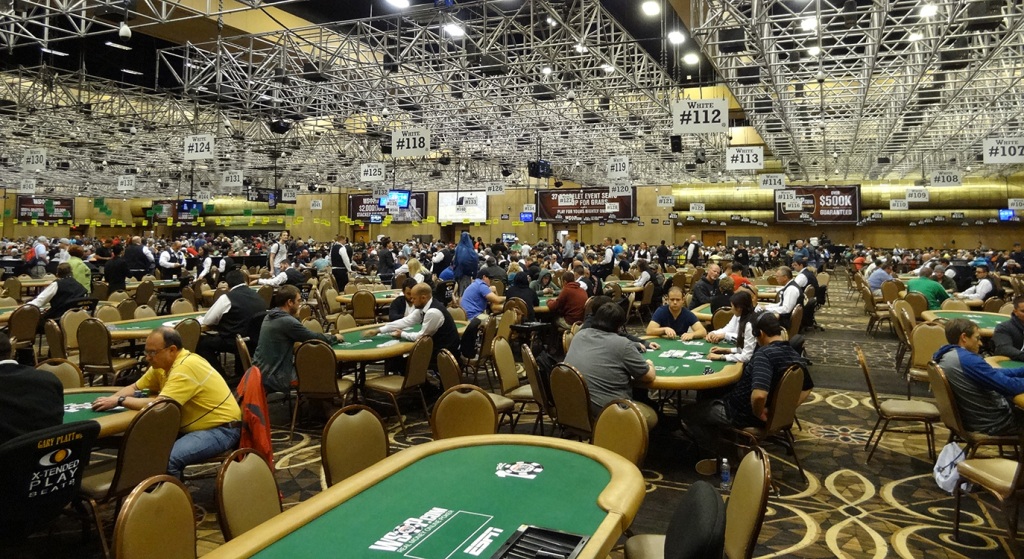 This figure brought the total number of poker players at the WSOP 2013 main event to a staggering 6,352, which however was the lowest turnout since the WSOP 2005, the same year that the event was last held at the Binion’s Horseshoe Casino.
The WSOP 2013 event also went down as the 8th largest event in the World Series of Poker event, falling only six players short of ousting the 2007 edition when Jerry Yang, an armature poker player, emerged victorious.
Despite a dip in players – 246 more players showed up at the WSOP 2012 event – the winner of 2013 event was going to take home a hefty $8,359,531 prize. The event was also a success, and the organisers were pleased with the general umph displayed by the players who came from 83 different countries globally.
One day satellite, which is an event where one player out of the 10 wins the main event buy-in, for a mere $1,060, ran throughout the afternoon as contenders tried outsmarting their opponents into the largest poker competition of the year as the deadline for the registration drew closer.
The event also marked one of the few instances in modern history where online poker was unavailable to players, and it’s perhaps one of the reasons for a decrease in player participation.
Nonetheless, this factor didn’t take anything away from what was at stake!
With the total number of 6,352 players, the prize pool for the WSOP 2013 event was an astonishing $59,708,800. The final nine players, from five different countries – the United States, Canada, Netherlands, Israel and France, were going to return to the Rio on Monday, November 4, 2013, to battle for the ultimate prize – the much coveted WSOP golden bracelet – and the lion share of the $59,708,800.
As already mentioned the No. 1 player took home a total of $8,359,531, while the remaining eight players will share the remaining $18,302,535 equally. 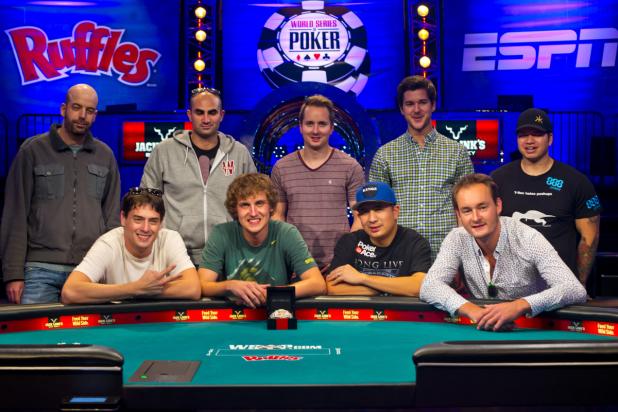 The 2013 WSOP finalists before the final event

Hometown: Toulon, France
Age: 26 Years
Profession: Poker professional
Chip Count: 19,600,000
Note: He went into the finals as the least accomplished tournament player, with only $3,198 in recorded earnings worldwide and zero career WSOP cashes. However, the French player considers himself an online poker specialist, and it’s a known fact that he’s very good when it comes to the $25/$50 no limit cash games.

Hometown: Amsterdam, Netherlands
Age: 32 Years
Profession: Poker professional
Chip Count: 11,275,000
Note: Michiel is perhaps one of the most successful Dutch professional poker players, winning several poker events across the world, as well as featuring for the fourth time at the WSOP main event. He owes his tournament to a river 7 which gave him a straight with J-9 against Loosli’s A-9. This gave him the largest opportunity of becoming the first ever Dutch champion at the WSOP.

Hometown: Chapel Hill, North Carolina
Age: 28
Profession: Poker Professional
Chip Count: 7,350,000
Note: After winning the prestigious World Poker Tour event in 2006, Mark Newhouse went through tough times, which forced him out of the poker spotlight for some time. However, with the effort and determination he managed to put during the day 7 at the event, he proved to many that even though you are short of chips, you shouldn’t be fast to throw in the towel. Mark Newhouse managed to secure the 9th position and a total cash payout of $733,224.

Hometown: East Lansing, Michigan
Age: 23
Profession: Poker Professional
Chip Count: 25, 875, 000
Note: You’ve probably heard so much about ‘Reiss The Beast’, but how much do you know about his WSOP 2013 match? Well, after his finish in second place at the WSOP Circuit main, Ryan became more determined to win a WSOP main event, a factor that propelled him to the 2013 finals. He had one of the most vocal rails at the final but managed to stage a good fight from a short stack to make it to the final, before proceeding to win the $8,361,570 top prize. 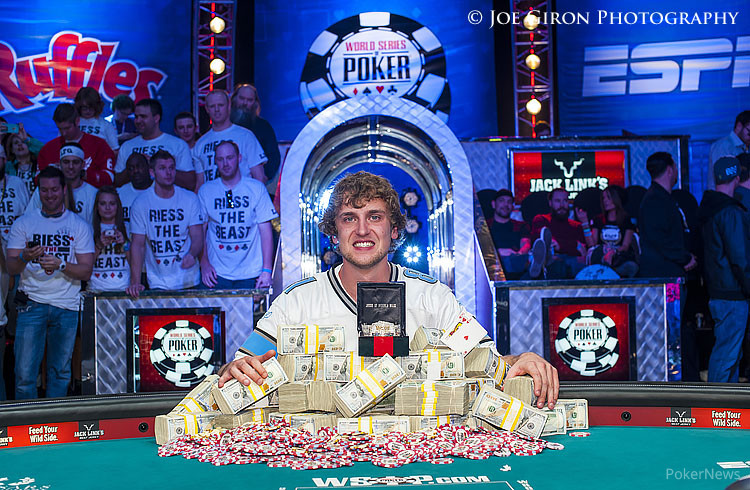 Hometown: Weston, Florida
Age: 38
Profession: Engineer, with a degree from University of Texas
Chip Count: 29,700,000
Note: He is best known for maintaining a low profile and not so many people are aware that Amir Lehavot was responsible for winning the $10,000 pot-limit hold 'em event in 2011. The WSOP 2013 event marks the 13th time he’s featuring in a WSOP event, where he’ll also be trying to make history as the first Israeli to win the event.

Hometown: Brossard, Quebec, Canada
Age: 25
Profession: Tattoo Artist
Chip Count: 26,525,000
Note: For the tattoo artist, it’s been such a busy year, especially when it comes to the poker scene. The WSOP 2013 event was his 7th cash career, and more remarkably his third top 86 main event cash over in a span of five years. At the 2011 WSOP event, he managed to reach the final and finished third, walking away with a $1,500 prize.

Hometown: Sacramento, California
Age: 36
Profession: Professional Poker Player
Chip Count: 38,000,000
Note: With no superstar featured at the WSOP 2012 event, the world was hoping that the WSOP 2013 could give them a star to spice things up a little bit, and with JC Train, they definitely found one. JC Tran has two WSOP bracelets in his name already, $8,300,000 in earnings and a WPT title. It is also the sixth time he was featuring in the WSOP event in the past 10 years. With all the earnings, he wasn’t afraid to put in millions in the pot, and it’s perhaps the main reason he reached the final with the highest number of chips.

Hometown: Fort Worth, Texas
Age: 25
Profession: Part-time poker professional and part-time student
Chip Count: 6,375,000
Note: Also known as ‘Raptor’ David Benefield had only a single WSOP cash this Series, but managed to earn himself up to $115,000 after finishing eighth at the WSOP’s €50,000 high roller event.

Hometown: Doylestown, Pennsylvania
Age: 28
Profession: Las Vegas VIP Host
Chip Count: 25,975,000
Note: For a night club promoter, living in Sin City, it’s no surprise he made it to the finals. Prior to Black Friday, Jay had been an avid poker player after which he turned to what he referred to as a ‘real job’. In the process, he started playing some cash games in Vegas before turning to some of the satellite events before finally reaching his first ever WSOP final before losing to Ryan Reiss. 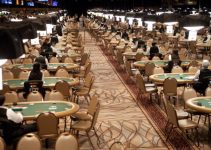 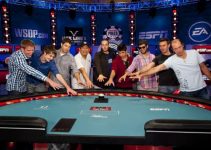 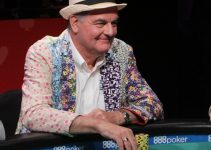